skip to main | skip to sidebar

Thank you to the men and women who served, gave and continue to give. May we bestow on you the honor deserved. 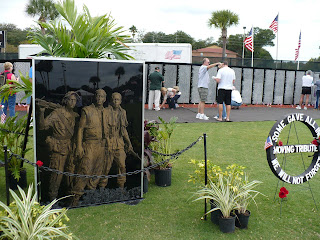 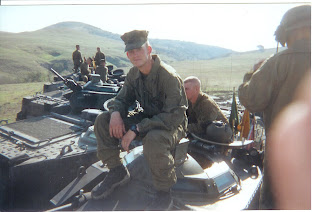 Thank you for serving, son. 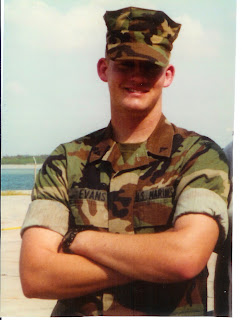 We praise the Lord everyday, that you came home safe.

God Bless America
Posted by Karen at 6:00 AM 14 comments:

A Matter of Character by Robin Lee Hatcher 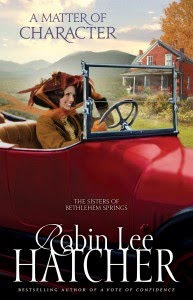 "Who says a woman can't keep a secret?" are the words on the back cover of this book.
Of course, as a woman, I take umbrage with that. Just another reason to read this delightful Christian fiction novel, the third in The Sisters of Bethlehem Springs Series. I didn't read the first two, but this book can stand alone. Robin Lee craftfully tells the backstory within the book, so it's much like a small mystery within the story.
Set in 1918, the author gives a glimpse into the life and customs of that era. The secret, known by only one, must be revealed and henceforth begins a romance. Say, does that sound like 1918 "speak?"

This is a quick and fun read that leaves you feeling happy and satisfied.
Check out Robin's website and contest. This book is listed with Amazon. I received this book free from The Blog Tour Spot for review. Check out other reviews here.
Happy reading.
Posted by Karen at 11:12 AM 9 comments:

Cat in the Can 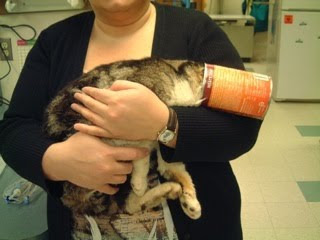 What's going on with this cat?

I think, if I was a cat, I'd be more embarrassed than hurt. Showing my need/want for dog food? If I was a cat, it would be beneath me. But I'm a dog lover (cat liker), so I'm not sure how cats really feel. Do you think she got this out of the trash can?

Anyway, Valarie, my good friend Jeanie's daughter, successfully cut the dog food can off it's head. Oh, Valarie's a vet.

"Fools are headstrong and do what they like; wise people take advice." Proverbs 12:15

Have you ever felt like a cat in the can? I know I have. Done foolish things that I should know better. Maybe my head was in the trashcan.

Take the trash out, Karen!

Labels: cat in the can, fool, trash, Valarie 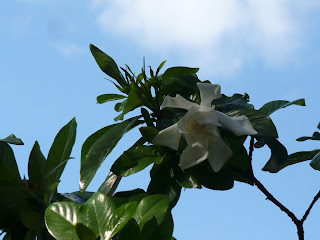 Gardenias. I love their look, color and smell. I have two giant bushes, about six-feet high. They always produce a multitude of flowers each spring. This year is no exception.

But there's a problem. The branches flower so much that they pull the bush downward. Then when it rains the white flowers drag the ground, heavy with water. (See this picture below.) Each year, after blooming I trim the branches back. They just love this spot in my yard and do well without much maintenance. Uh ummm, or no maintenance....for those who know me. 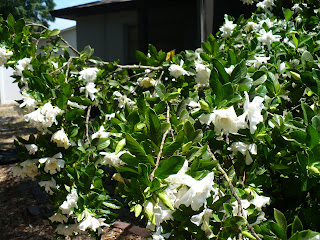 "Now when Jesus heard it, He withdrew from there in a boat, to a lonely place by Himself."Matthew 14:13

"And in the early morning, while it was still dark, He arose and went out and departed to a lonely place, and was praying there." Mark 1:35

The past few months, some bloggers that I follow needed to stop a while for rest and regrouping. They had good substance and followers, but the "fruits of their labors" and life became heavy. And that's okay. Even Jesus took time for himself when needed.

No, I'm not stopping, my point is that just as creation needs cutting back, sometimes so do we. And like my gardenia plants, we will come back better.

So all ya'll take care of yourselves and take time for yourselves. 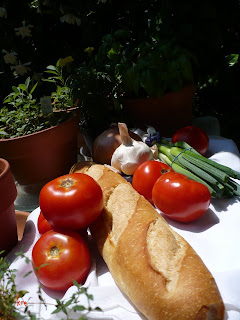 Ah, fresh tomatoes are back! Yeah! The local fruit stands are full of fresh summer veggies again. So I had to immediately go and get the ingredients for this, my fav summer recipe.

"Therefore, if anyone is in Christ, he is a new creation; the old has gone, the new has come!" 2 Corinthians 5:17

When my soul became soggy and mush with the world and its offerings, I'm so glad God brought summer into my heart and made me a new creation.

Many thanks to Hilary for the "post of the week" award. You are just so sweet!

Photo:karenevans
Posted by Karen at 6:00 AM 14 comments:

Smile
My brain is zapped, fried, whatever. So enjoy my grandkids. Check out the above video. 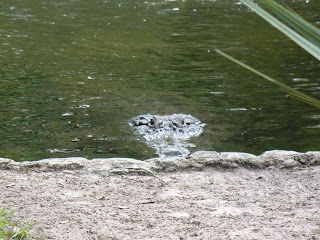 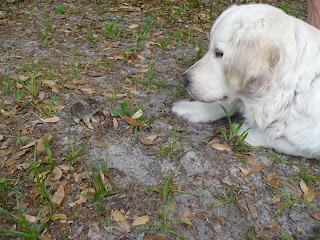 This post comes on the tails, uh, pun intended of Parsley's post, Dumb Bunnie. Can you make out this baby rabbit? My dog is staring, waiting for my release command. He dropped the bunny to get a "treat" instead, but intense, animal focus remains.

Now for those of you who don't know, my yard backs up to a four lane road. I am not in the country. Anyway, Major found a nest of four, yes four baby bunnies, just like this one, Wednesday. I was out in the back yard, and saw him lay down with something wiggling in his mouth. My first thought was a snake. I ran up and told him to drop it which he did. That one was hurt, by the time I removed that bunny he had # 2 in his mouth. And so it went, till all four were rescued.

Here's where the dumb bunny-(DB) comes in. My neighbors on both sides are pet free, but where does the DB nest? Yep, right here. And get this, this time it was right behind my hubbie's barbecue pit right next to our patio. Helllloooo, is anyone home?? We counted all the nests that Major has found and DB has had about 15 bunnies in the past 2 years. Sigh......

I love the little bunnies, but this is not the right yard for them. This picture is how Major was restrained, he didn't do it all on his own. (We're lucky retrievers have such a soft mouth.) 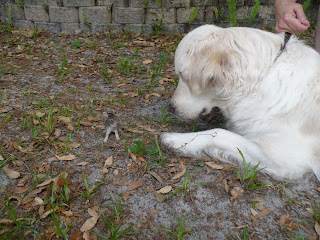 "They confronted me in the day of my calamity, but the Lord was my stay." Psalm 18:18

How many times have I gone after something that I shouldn't have? Maybe it wasn't even anything bad, but not the best, not what God wanted? Yet God became my "stay," my protector and treated me with something better.

Ah, keep Your good hand on my collar, Lord, this one is prone to chase.
Posted by Karen at 6:00 AM 20 comments:

Ever Wanted to Yell at the World? 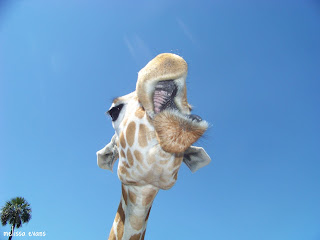 People. Sometimes they astound me.

On my way home from work the other day, I stopped at a red light. The lane next to me was the right hand turn lane. (Here in Florida, unless otherwise noted, you can stop, look and if no cars are coming you can turn right on red.)

A horn blasted behind me, and I looked to see what was going on. A truck, second in line in the right turn, started honking at the car in front of him. The little lady in front appeared to be in her late sixties or seventies, I couldn't tell. She was hesitant to turn right on red with the cars traveling so fast.

But, yep, that dude in the truck, kept honking. He stuck his hand out the window and motioned for her to go. Of course everyone knows, that only serves to rattle a person more.

Then cars around me started honking at the impatient guy. To my surprise, the dude got out of his truck, went and knocked on her window, cussing at her to move. (You just don't do that here either, too dangerous.)

A man in another car said, "Hey man, leave the lady alone!"

To which he responded, "Kiss........" His face was as red as a beet with anger. If anyone was going to have a wreck or heart attack that day, he sure was a candidate.

The light turned green and off we all went. But what a lasting impression that made. Hope the little lady is okay.

"He who is slow to anger is better than the mighty, and he who rules his spirit, than he who captures a city." Proverbs 16:32

I drove away angry at the man, like, I wished I was a cop and could follow and ticket him. Was my anger justified? Maybe. No one was hurt, it was just senseless. But as I stewed in my disgust on the way home, I started to wonder, maybe the guy just got laid off work, or someone was ill in the hospital, or ......

Before I hand down judgement, the biggest question is, can I control myself?

Photo: Melissa Evans
Posted by Karen at 6:00 AM 19 comments:

My blogger friend, Emily Ann, tagged me. So I'm to write what I like, hate and love. So here goes.

I like it when my dog sleeps a little later in the mornings.
I like chocolate, uh oh, that may need to go under love?
I like crisp, clean days after a nights rain.
I hate when I'm sick.
I hate to hear about child abuse. And I hate what I want to do to the perps.
I hate Satan's lies to people.
I love my family-hubbie, children, grandchildren, parents, oh, all of'em.
I love seeing my children have joy and walk in the path of truth. (All my children and grandchildren here.) :) 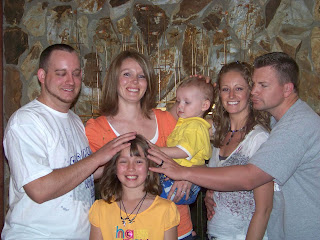 I love how God loved me from "way back yonder," before I even knew Him.

Now, it's your turn. I'm tagging:
Jeanie
Laura
Kate
Down on the Farm gal
Libbie
Dave


So ya'll have fun and let us learn a bit about you.

AND I must show you this picture of Laura, my dear friend's, first book coming out this summer. 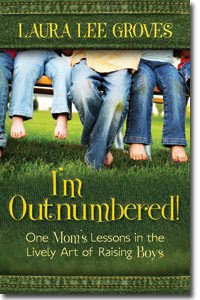 You've got to get this book, when it comes out! It's full of practical and fun info. She also emails a newletter. Check out her site. You'll love it!

Have a great time learning and visiting new blogs.

Check out my web site created by my son. It's great!

Karen
I was born in cajun country. I now live in Florida with my husband Mike. My daughter Shelly, and Dan her husband, live close. My son David and his wife, Melissa, along with my three grandchildren live in Virginia. I love them all and thank God I have been so blessed. I wrote tips for Focus on the Family "Teen Phases" magazine and have a short story in the "God Encounters" anthology. I have a story in the book, "Fighting Fear; Winning the War at Home When Your Soldier Leaves for Battle". I once kissed, danced and swam with dolphins, and falcons have landed on my arm. Love my English Golden Retriever. I'm a sucker for chocolate and salsa.

Find my stories in these books 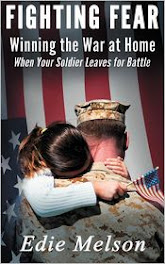 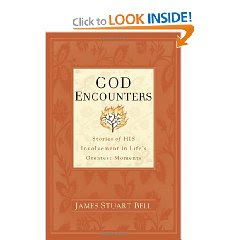 Check out my kids sites below. I just love'em all!

Check him out! He's really cool, the one on the left. DED 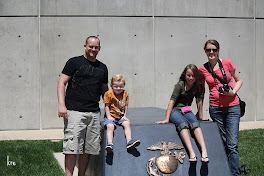 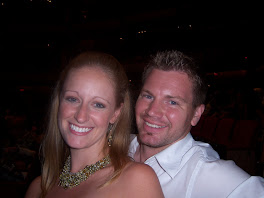 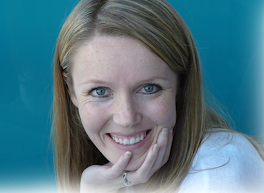 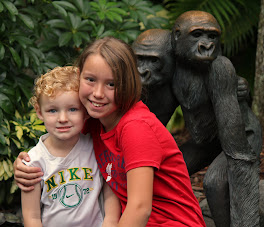 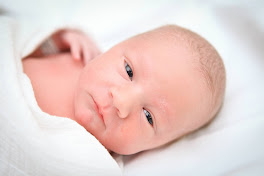 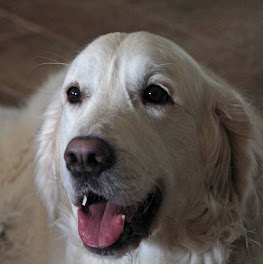 I also write on Kindred Heart Writers blog. Check out their books below 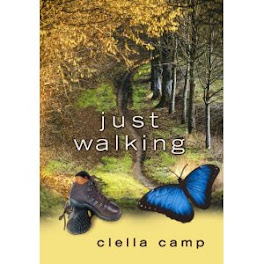 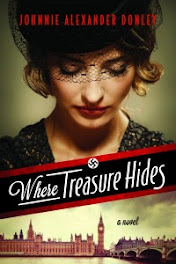 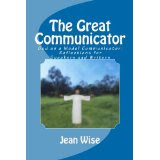 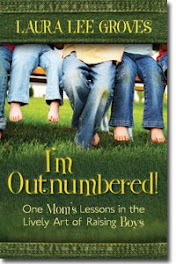